After spending most of the summer in Broadstone I’m now back London. My return was delayed by the petrol shortages which are already seeming like a distant memory but which were very frustrating for motorists only a month ago. Broadstone was no bad place to be stranded but I was missing my COVID and flu jabs and the next installment of my cancer treatment, and there were other things that needed dealing with, so I was getting rather twitchy as the time to return approached.

This recent summer has been a whole lot better than last year’s, however, when amid the double isolation of lockdown and shielding I underwent a course of radiotherapy, which was torturous in itself and which didn’t work. I still have cancer, and it’s spreading. This wasn’t helped when my next-door neighbour in London played a cruel trick on me for her own amusement, which wasted a lot of my time and work and thoroughly humiliated me. Before she did that we’d been quite friendly, but that killed any possibility of future friendship and has made the neighbourhood into a very unfriendly place for me.

There have been good things happening in Broadstone, however, apart from getting together with the much better neighbours there. Celia’s caponata was a real treat, but the reason I went there in the first place was to meet up with a visitor from New Zealand, my neice Juliet’s husband Gerard whom I’d never met and who had wangled a visit to see his father and Juliet’s father, my former brother-in-law, both stricken with cancer. The damn thing’s everywhere. Gerard proved to be a very nice guy. I hope to see him and the rest of the tribe again one day.

Another nice thing that came completely out of the blue was a request from a publisher to reprint a piece I’d written on my blog — this very blog — in a collection of new writing that they were bringing out. I said yes, of course. They’ve moved quickly to get this done and I’ve now received a copy of it. It’s the latest volume in an ongoing series called Emanations, 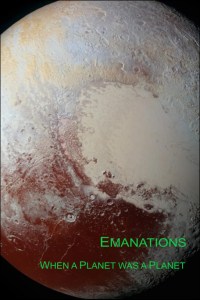 and I can’t deny that I’m chuffed to bits. It’s the first time my name has appeared in print for about 20 years, and it’s encouraging me to write more and maybe try my hand at drawing again. Emanations 9, with a lot of fascinating writing in it including a new Jerry Cornelius story from Michael Moorcock, is now available from Amazon here, but the original version of my piece (with illustrations) is still here to be read for free.

I got some other things done in Broadstone, like writing a whole lot of stuff about vegetables for reasons that are obscure even to me and getting my car through its first MOT, but most of the time I basically flaked out.  After nearly two years of near-isolation and inactivity perhaps this was what I needed to do. Eventually I felt better for it, and returned to London somewhat energised and ready for the fray.

The fray in question was likely to be the next assault from my horrid London neighbour. Last time I returned I found that she’d been making complaints about the somewhat overgrown state of my garden — not to me, however, but to the estate agents representing the freeholder of the flat she lives in with her husband. She’s well aware of my health problems. Her complaints were soon dealt with but the fact that she had made them and in such a devious way has soured the atmosphere even more. I’ve been wondering what I can do about this as it’s been bugging me, and I was somewhat heartened by a newspaper story that I came across here while I was away, about an incident that happened not far from Broadstone. It was good to see the other neighbours rallying to this poor woman’s defence and getting together to help her with her garden, and while I can’t quite imagine the same thing happening in trendy North London I think a bit of naming-and-shaming of my persecutors might not go amiss. I can’t imagine what makes people so self-righteous, judgemental and mean-spirited. Some of the charities dealing with the problems of older people are now speaking out against such abuse and may be able to help me and perhaps speak for me, since I’m not always very good at speaking up for myself. We’ll see.

In the meantime I’ve returned to something of a financial crisis, partly my own fault for not dealing with the agreement on my car while I was held up in Broadstone, but all the relevent documents were in London and in my semi-comatose state I let it slide. The problem’s solvable but is taking a good deal of phoning and emailing and running around to banks, and until it’s solved I’m just about broke. Not starving, but broke. Gerard’s now back in New Zealand after a longish period in a quarantine hotel in Auckland where he didn’t want to be when he was longing to get home to Tauranga. The rest of the family seem fine, and now Gerard is too. I’ve now had all my jabs and despite all the problems and the cancer I’m feeling quite optimistic. Again, we’ll see.