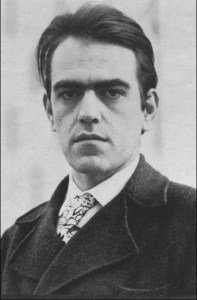 Michael Moorcock writes:  “One of my closest, longest and best friendships was with Lang Jones, a talented composer, editor and writer, one of the most modest people I have ever known, with the sweetest nature of almost any human being I’ve met. He was Assistant Editor of New Worlds. He restored Titus Alone by Mervyn Peake to the edition you probably read and wrote the music for The Rhyme of the Flying Bomb. You can hear his lively piano on ‘The Entropy Tango’ here. His own collection of stories The Eye of the Lens (1972), remains his only fiction in book form. He was a socialist and conscientious Ascot-elected councellor for many years. I last saw him about two years ago, at the wonderful wedding of his daughter Isobel to Jason Nickolds, for whom he was extremely happy, and he said he had stopped writing and composing and had never felt better. He leaves a son, Damon, as well as his daughter. One of the few people of whom it’s possible to write: Loved by all.”

I didn’t know Lang nearly as well as Mike did but during the ten years that I worked on New Worlds I saw a good deal of him and initially admired him as an extremely conscientious editor. Mike tells me that when they had to check the proofs of some particularly boring serial story they would sing the text to each other, but however it was achieved New Worlds was always remarkably free of typos thanks largely to Lang’s scrutiny, and personally I found Lang a very congenial fellow. By the time I appeared on the scene he had been working with Mike on the magazine for several years and could have been prickly about an arriviste like me, but he wasn’t: he accepted me straight away, made me feel welcome. and was always encouraging and actually enthusiastic about my artistic efforts.

Indeed, enthusiasm was the quality that I came to associate most with Lang. He was of course hugely enthusiastic about the works of Mervyn Peake, whose work I greatly admired too, and in Lang I found someone with whom I could talk about serious music, though he knew much more about it than I did having studied music at college earlier in life. This was refreshing at a time when most of the gang were enthusing about Hendrix, Dylan, the Beatles and the Stones, though in Mal Dean I found a fellow jazz-lover. But it was Lang who suggested that I should listen to Schöenberg’s Verklärte Nacht, a favourite piece of his, which I did and after some initial resistance I came to love it too. I initially favoured the work as scored for orchestra but Lang persuaded me that the string sextet version was even better, the purer conception, and he was right. Listen to it here and if it makes no sense at first, as it didn’t with me, try it a a couple more times with a drink or two and let the magic take hold. Thanks for that, Lang. 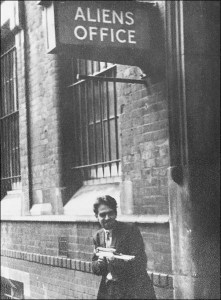 It wasn’t all serious stuff, however, I found that Lang and I shared a liking for the radio series I’m Sorry I’ll Read That Again with its brilliant musical parodies by Bill Oddie, but while I just listened to them for fun Lang taped them for future study. He was also keen on clocks, collecting strange ones that he found on the stalls of nearby Portobello Road Market — his flat was full of them, and one of his best stories is ‘The Great Clock’ — and at one time he became rather obsessed with the movie Beneath the Valley of the Dolls (1970), returning to the cinema several times to relish its delights afresh. Lang was an amusing guy in many ways.

He was still writing fiction for New Worlds when I knew him but I only once got to illustrate his work which, time being short, I did with a collage of images of Jerry Cornelius. With characteristic enthusiasm Lang said that it was the best collage he’d ever seen, which was way over-the-top but that was Lang. But whoever illustrated them it was always a treat to find that the latest issue of the magazine had one of his stories or reviews in it. Here are some of the ones that gave him a namecheck on the cover:

Mike Moorcock adds:  “His fiction is wonderful. When asked why he didn’t write more he said: ‘That’s all the stories I have to tell.’ The Eye of the Lens is closer to Borges than anything but, like his playing of Mozart, for instance, utterly and precisely idiosyncratic. He had only artistic ambition and was never rich. He appears to have died pretty much as he lived, steering his own steady course to the end.”

He certainly wasn’t rich. I recall visiting him at his flat in Colville Terrace and finding the newborn baby then known as Plonk because of the sound he had made in utero stashed away in a cot beneath the grand piano which dominated the room. We had to speak in hushed tones so as not to wake him. The baby was soon properly named Damon, and he seems to have survived this unusual babyhood untraumatised by the experience.  Once, to raise a bit of  money (with me acting as negotiator and go-between) Lang sold a suit to Mike Harrison — a rather nice white linen suit with broad lapels and flared trousers in the style of the time, and even a waistcoat, the whole ensemble a gift from Mr Moorcock — in which Mike looked very dapper, wearing it for a croquet weekend at my parents’ place in the country and cutting a dash at science fiction conventions both here and in the USA. A deal, and a suit, that pleased everyone.

Lang’s anthology The New S.F. (1969) more or less defines the new wave of the period and is well worth seeking out. He was also involved with Mike Moorcock in compiling the anthology of stories and cartoon strips about Jerry Cornelius, The Nature of the Catastrophe (1971), which contains some stuff by me and which gets reprinted from time to time. Lang’s own fiction was collected as The Eye of the Lens (1972), which has been reprinted by the good people at Savoy Books and as our personal memories fade that will stand as his memorial.