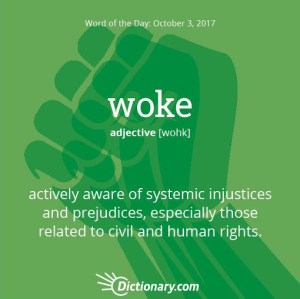 From Wikepedia: Woke is a political term that originated in the United States, and it refers to a perceived awareness of issues that concern social justice and racial justice. It derives from the African-American Vernacular English expression “stay woke”, whose grammatical aspect refers to a continuing awareness of these issues.  First used in the 1940s, the term has resurfaced in recent years as a concept that symbolizes perceived awareness of social issues and movement. By the late 2010s, woke had been adopted as a more generic slang term broadly associated with left-wing politics, social justice activism and progressive or socially liberal causes such as anti-racism, LGBT rights, feminism and environmentalism (with the terms woke culture, woke politics and woke left also being used).

I became aware of the word last year.  I missed Erykah Badu’s song ‘Master Teacher’ in 2008 which apparently popularized it with the chorus ‘I stay woke’, but the Black Lives Matter movement last summer brought it to much wider notice, including mine, while the recent accession of Joe Biden to the US presidency provoked a lot of questions along the lines of ‘Is he Woke’? and the right-wing media have seized on the term with stories like these, all from the Daily Mail in the last few days:

REVEALED: How ‘woke’ English teachers have cancelled Shakespeare because of his ‘white supremacy, misogyny, racism and classism’ – and are instead using his plays to lecture in ‘toxic masculinity and Marxism’

Black Country residents have slammed ‘woke’ Facebook rules after a local history group was threatened with a ban for discussing the local delicacy – faggots and peas.

It’s reminiscent of the scorn which greeted the Political Correctness movement a few years ago when people ridiculed the more extreme examples with cries of “It’s political correctness GONE MAD.”

From what I’ve learned I think I’ve been woke ever since I first became interested in politics and social issues in the early 1960s when nearly all of my generation were lefties.  Some of my friends went to extremes, becoming Trotskeyites and even Anarchists and looking forward to the Revolution that seemed imminent as the sixties progressed.  One of them told me that he and a few fellow radicals had been practising with home-made Molotov cocktails on some waste land somewhere, and many of them attended the anti-American demos in Grosvenor Square; Graham Hall (now dead so I can name him) boasted of having knocked over a police horse, which disgusted me as I didn’t think that horses held political views. 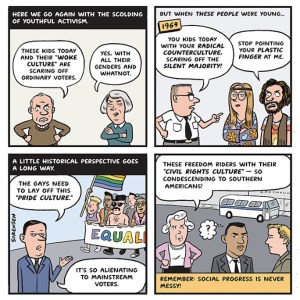 I never bought into any of that stuff.  As a jazz fan I knew about Jim Crow from an early age and was horrified by the accounts of what had happened to some of my heroes: Lester Young having an appalling time in the army, Billie Holiday not allowed to sit with the rest of Artie Shaw’s band, Duke Ellington having to buy sandwiches for his band because no restaurant in the South would serve them … and as the 1960s progressed there was much talk of Revolution, but I knew that there wasn’t going to be any such thing.  For one thing, the people planning it were so incredibly inept, but we did what we could on a local level, starting adventure playgrounds for disadvantaged kids, getting involved with ‘alternative’ publications, supporting the Labour Party etc. — but this isn’t a recital of my own woke credentials, such as they are.  I did a bit, but nowhere near enough.

I think I’m woke, though I hope I’m not sanctimonious about it and definitely not a woke warrior.  Which takes me on to the next key question of our times: am I a Snowflake?