I don’t think my taste-buds are any less sensitive or less educated than anyone else’s. I’ve dined in some fancy places in Paris, Rome, Madrid, New York and many in London, I’ve commissioned and published books on fine food and wine, I’ve eaten and enjoyed superb meals served by kind friends and now and again I’ve even attempted some fairly exotic dishes on my own account and I know the good stuff when it finds its way into my mouth, but there are times when nothing but a plate of bacon and eggs will do. It would be mad to go to l’Escargot or the River Café for such basic fare, so this is my little song of praise for the places that have provided me with such things at reasonable prices over the years. There are three that I remember with particular affection.

The first, unlikely as it sounds, was a Chinese restaurant called The Rickshaw in Sheffield, just down the road from the university where I was a student from 1964-67.  After six years at boarding school I was heartily sick of institutional life so tended to avoid the students’ union cafeteria, since for the first time in my life I could make my own decisions about where and when I could eat. The Rickshaw offered OK food at very cheap prices — sometimes it was indeed bacon and eggs but more often it was their three-course lunch which offered soup, sausage and chips with gravy, and a pudding for one-and six (7½p). I never once had Chinese food there.

A Chinese restaurant in the daytime is not always the prettiest place but I’ve never minded a bit of sleaze and the Rickshaw had that all right, for apart from the shabby décor it soon became apparent even to my still rather innocent eyes that the upstairs, accessed by passing through a bead curtain at the foot of the stairs, was a brothel. Every so often as I and sometimes a friend tucked into our chips a businessman would quickly enter the place looking neither to the left or the right, disappear behind the curtain and ascend the stairs, to emerge equally speedily about twenty minutes later then disappear into the midday throng outside. Highly diverting, though in the three years that I dined there we never saw anyone there who looked remotely like a prostitute, which made it all the more intriguing.  I liked to imagine that the upstairs rooms were decorated in ornate Oriental style where might be found a seductive maiden perhaps named Precious Jade or Lotus Flower, but I suspect that it was more likely to be some down-to-earth local lass called Doris.

Another attraction of The Rickshaw was that just across the road was a traditional pub, The Hallamshire, where good ale was served and where I became acquainted with the poet William Empson as I’ve already mentioned, and just recently I was surprised to find The Rickshaw mentioned in the autobiography of David Nobbs, the creator of Reginald Perrin and many other wonderful comic characters on tv and in his novels, who had patronised the place when he was a cub reporter in Sheffield. That was before my time, but it’s rather nice to know that he remembered it too.

I came to London in the autumn of 1967 ostensibly to do a Ph.D but I soon got involved with a magazine called New Worlds [see my earlier post ‘Nigel aka Simon’] and we often worked late into the night to get the magazine out on time at the office in Portobello Road, and on one of these occasions Charles told me that he had designed a menu-board for a café that was opening next-door-but-one in return for a couple of free meals.  This was The Mountain Grill, and as it seemed to be open and we were hungry Charles suggested that we go there and have those meals.  As I recall, this was a fairly dismal experience: we were the only customers — possibly their very first — and the place was distinctly lacking in atmosphere, though the food was OK.

Soon after that Charles moved to the USA but I still spent a lot of time at the nether end of Notting Hill, as many of the people associated with New Worlds were still around, including my friend Bob who roped me in to help run the adventure playground that he and a few others had built in one of the bays underneath the newly-built Westway flyover. 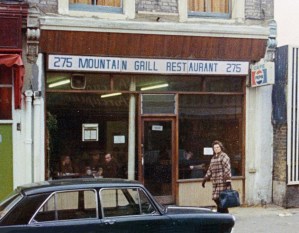 By now I had a full-time publishing job in the West End, but on Saturdays Bob and I helped to run a stall in Portobello Market to raise funds for the playground.  The Mountain Grill was our local hangout and It soon became known to us as Maria’s after its roly-poly proprietress, and after several hours on the stall on a freezing winter morning it was great to be able to go and get warm and stuff our faces there.  Our favourite dish was chicken pilaf which was served on white oval plates with rice AND chips: a really good big plateful for a couple of quid. When husband George introduced sheftalia — spicy little Greek sausages — onto the menu we sometimes had those, and very tasty they were but not as filling as the pilaff.

The lunchtime clientele was interesting.  Apart from the other stallholders, playworkers and assorted locals, members of the newly-formed space-rock band Hawkwind often hung out there.  I knew some of them through Michael Moorcock, the editor of New Worlds who was working with Hawkwind as lyric-writer and occasional performer, and Mike sometimes joined them there.  He once decribed Hawkwind as ‘like the crazed crew of a spaceship that didn’t quite know how everything worked but nevertheless wanted to try everything out’.  They sometimes performed under the motorway when the stalls had been cleared away, and an added attraction was Stacia who danced to their music in a creative and often naked way, and I suspect that some of the crowd came less for the music than for a glimpse of Stacia’s magnificent boobs, or perhaps they were keen students of modern interpretive dance.

We were thrilled when Hawkwind actually scored a top ten hit with ‘Silver Machine’ with its vocal by Lemmy and appeared on Top of the Pops (“Hey, I know those guys!”)  Here they are doing their thing, though Stacia is rather restrained on a tv appearance.  The café gained a degree of fame for itself with Hawkwind’s punningly-titled album The Hall of the Mountain Grill with fine cover artwork by Barney Bubbles, and in one of Mike’s novels he included a seating-plan showing where he and each member of the band would sit.

Maria died young.  George carried on for a while and even had his own name painted on the sign-board outside, but after a while he turned the café into a fast-food joint and soon after that it closed, to be taken over and re-opened in various trendy guises (latterly it was called Talkhouse) as Notting Hill became gentrified.  Google Street View currently shows the place closed and boarded-up, another victim of the pandemic I guess, but Mike is still writing fine novels, Hawkwind are still recording and performing, and Stacia is now one of my Facebook Friends.

I moved to Crouch End in 1977 and have lived mostly in the same area ever since, during which time I think I’ve checked out every greasy spoon — no offence — within walking or short driving distance. My favourite for a long time was a very basic café in Middle Lane, which if it had a name I’ve forgotten it. Here the bacon and eggs were good and after running errands in Crouch End I liked to go there — since my Rickshaw days I’ve never minded lunching on my own (dinner is a different matter) — and have a tuck-in with a mug of strong tea and a couple of fags, have a glance at the redtops (provided by the café) then have a stab at the Guardian crossword.  I got to know the proprietor and shared his misery as the place quickly lost most of its customers, driven away by the triple whammy of the smoking ban, draconian parking restrictions and soaring business rates.  Crouch End was a shabby area when I first came here but it too has gone up in the world, and this unpretentious greasy spoon became the rather precious Wisteria Café.  I tried it once — not my scene, maaaan — and now it’s The Haberdashery, which is even less appealing.

More recently my favourite breakfasting place has been the one nearest my house, which has changed its name and ownership and appearance several times over the last couple of decades and is currently Café Carmel.  It’s nothing special, no great atmosphere, no rock bands and no sign that it does double-duty as a whorehouse, but it’s clean and the food is good enough which is really all I want these days.  My last breakfast there was a year ago on the day of the general election. 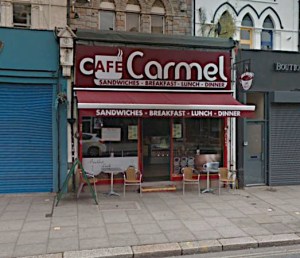 I’d gone out mid-morning to cast my vote and decided to take a detour on the way home to visit the café , and wandering back after a good feed I began staggering and had to cling onto walls and lamp-posts to support myself.  I nearly made it home but at the garden gate my legs turned to jelly and I measured my length on the pavement.  I didn’t lose consciousness but I couldn’t get up and there was no-one around to help me, so I had to crawl up the garden path to the stoop and managed to reach up to the door handle and drag myself indoors.  I’ve fallen down a couple more times since then and bought myself a walking-stick which makes walking a bit safer, but it’s very frustrating; I used to be a great walker — I even used to climb mountains — and thank goodness I’m still able to drive.

My hope for 2021, apart from world peace and all that, is therefore a very modest one: to be able to walk unaided to this café and have another late breakfast there.