The prospect of a Zombie Apocalypse, which I’m assured is imminent, raises the question “Who would you most like to see returning as one of the undead?” which takes its place alongside other topics for late-night debate such as “Where would you go if you had the free use of a time machine for 24 hours?” and “Are you happy? No, really happy?”  God, we have fun.  Anyway, here’s my candidate for zombiehood.

1977.  A crowd of around 150 people gathered in the cemetery at San Antonio to see a large wooden crate being lowered into the pit that had been excavated to receive it.  Inside the crate was the corpse of a beautiful young woman named Sandra West seated at the wheel of her favourite sports car.  This is her strange, sad little story. 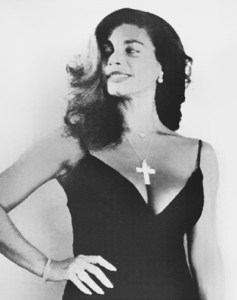 Born and raised in southern California, Sandra Ilene Hara had a fairly prosperous childhood.  Her parents ran a store selling classy children’s clothes and Sandra often saw wealthy customers coming and going, which may have given her ambitious ideas about how her own future should be.  Details of her schooling and adolescence are scanty but she was bright and grew into an attractive young woman, soon becoming popular on the local dating scene.

She wanted much more than casual dates, however, and her first serious shot at bagging herself a rich husband was by starting an affair with a guy named Sol West whose money came from extensive cattle and oil interests in Texas, but Sol was a womanizer and serially unfaithful — and Sandra had discovered that his older brother Ike was the real heir to the West fortune, so she switched her attentions to Ike.  On the face of it he seemed even less promising than Sol as husband material, having been banished by his family to Mexico to try and cure his booze and drug dependency in the care of a sort of bodyguard, but Sandra was not deterred; she travelled to Mexico to meet Ike and ‘with loving patience’ (as one account puts it) she helped him to clean up and convince the family that he was fit to take charge of the business, with Sandra by his side of course.  They married soon afterwards and moved to California to enjoy a luxurious lifestyle together.

It didn’t last long.  They moved into a Beverly Hills mansion and spent lavishly on the fine things of life, including the blue Ferrari 303 America that would eventually become Sandra’s coffin, but Ike’s bad habits soon returned and he died at the Flamingo Hotel in Las Vegas in 1968 ‘under mysterious circumstances’ according to my source, which gives no more details.  Whatever had happened, Ike’s demise left Sandra a very wealthy widow.  She wasn’t shy about flaunting her new wealth and soon she was dating the likes of Frank Sinatra, Nicky Hilton and even Elvis Presley, and her behaviour became flamboyant.  She was liable to appear in public dressed as a Texas Rodeo Queen, and she once drove up to exclusive Chasen’s restaurant, made a grand entrance, ordered a single hamburger to go, then drove off at speed into the night munching it.  She bought more cars — she had a bit of a thing for Ferraris — and wore more and more jewellery.  It looked as though she was having a fabulous time but people who knew her said that she was lonely, and as the years went by she became increasingly reclusive and her behaviour more eccentric.

She became fascinated by the Ancient Egyptians, especially their practice of being buried with their worldly possessions, and she made a will insisting that she ‘be buried next to my husband in a lace nightgown seated in my Ferrari with the seat comfortably slanted’. 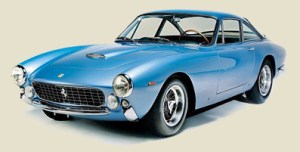 She crashed the car in 1976 but the damage was fairly minor and she didn’t bother to have it repaired as she was now pretty much a shut-in heavily dependent on drugs, which like many rich Californians (and Elvis) she was able to obtain easily despite being under the supervision of a nurse, and her death in March 1977 was due to an overdose of barbiturates and codeine.

There followed a long legal battle over her will.  No-one disputed that brother-in-law Sol — remember him? — was the only realistic heir, but Sol wanted the money without going to the trouble and expense of interring Sandra in her car, so while the wrangling went on she was buried in a temporary grave until things were resolved.  The California court eventually ruled that Sol would only get the dough if Sandra’s wishes were carried out to the letter, so the blue Ferrari was sequestered and Sandra’s body was dug up and both were transported to San Antonio in a large wooden crate, where Sandra was dressed as she had wanted and placed in the car: an unusual job for the morticians who presumably did it. 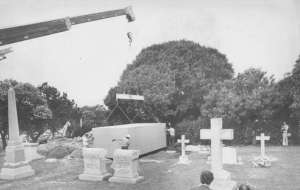 Diggers made a large pit in the ground and a large crane was brought in to lift the crate into it.  The grave was then covered with a thick layer of concrete to prevent anyone getting at the crate and its contents — not so much Sandra as the Ferrari which would now be worth around $2 million.  The site was marked with a simple stone slab placed alongside that of her late husband Ike, and it has now become something of a tourist attraction in the local area even though there’s nothing much to see.

Come the Zombie Apocalypse, when the dead rise from their graves, I would love to see the turf part and the concrete shatter and the crate splinter, and Sandra come roaring out of the ground in her Ferrari (also miraculously restored to life) to wreak a terrible revenge on the people who had treated her so shamefully.

One thought on “My Favourite Zombie”