Talking of uncles, I was once staying overnight in a cheap hotel and having checked in at midday and done the business I was there to do I realized that I had a long solitary evening ahead and had brought nothing to read. The local shops had nothing resembling a bookshop or even a decent newsagents but there was an Oxfam shop, so I had a look at what reading matter might be on offer there.

It wasn’t promising: the usual Jeffrey Archers, paperbacks by people I’d never heard of and knew I wouldn’t like, tattered gardening manuals etc. so in desparation I had a look at the children’s section and a book called Uncle caught my eye. I’d forgotten to bring my specs with me and the author’s name seemed to my blurred vision to be J.B. Morton who I knew and loved as Beachcomber, the humorous columnist for The Daily Express. Had he written a children’s book? I decided to take a chance and bought it.

After a nasty takeaway eaten sitting on the edge of the bed and with nothing on tv — only three channels and no Netflix then — I examined my purchase and found that it was in fact by a certain J.P. Martin whom the blurb informed me was a retired Methodist Minister, just like my dad. Not necessarily a good omen but I started reading anyway and was soon entranced.

Uncle is the fabulously rich owner of a sort of castle called Homeward, though ‘castle’ doesn’t do justice to this astonishing place with its towers, moat, private railways and wonderful collection of residents: Goodman the cat with a taste for detective stories, the little lion who can make himself heavy just by concentrating , the two Respectable Horses, and many many more.  Uncle is an elephant, by the way. 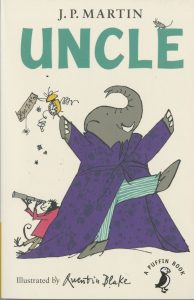 On the other side of the moat is Badfort, occupied by a crowd of ne’er-do-wells led by Beaver Hateman, and they are Uncle’s enemies. They dress in ragged sacking, get drunk on Black Tom and Leper Gin, and they constantly plot and scheme to embarrass and bring down the Dictator of Homeward. Rev. Martin had an incredible, teeming, hilarious imagination, and if I’d worried that there might be some sort of moral attached to all this I needn’t have. It was pure nonsensical  bliss.

I was enjoying Uncle so much that I had to ration myself to a chapter at a time, going outside for a cigarette break in between bouts, and when I returned to London I wanted to know if there were any more of these amazing books. The good news was that there were six of them in all, and the bad news was that they were incredibly hard to find. I was a haunter of second-hand bookshops in those days and luckily found the second volume in a local one, the late-lamented Ripping Yarns in Highgate, but I could never find the others, even in dealers’ catalogues. There was a rumour that a wealthy American collector was snapping up any that copies that came to light, and it may have been true for I was never able to get my hands on one.

Years passed. Then out of the blue came the news that there was an omnibus edition in preparation: all six books in one handsome volume with the original illustrations by Quentin Blake (now Sir Quentin) and encomia by the likes of Neil Gaiman, Martin Rowson, Andy Riley, Kate Summerscale and Justin Pollard. Other famous fans of Uncle included Will Self, Spike Milligan, Philip Ardagh, Richard Ingrams, Ekow Eshun and David Langford — and I’d thought I was the only fan, the sole discoverer!  It was expensive but I had to have it and it didn’t disappoint. Lots more bliss.

The omnibus is even more expensive now but some of the titles have now been made available as Kindles, for anyone who wants a taste without forking out too much cash. Uncle won’t be everyone’s bucket of cocoa but I think those who like him will like him very much indeed.