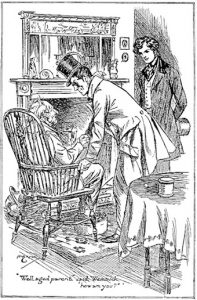 Going through some old papers I found various letters and cards from my father which he had signed “from the Aged Parent” or just “Aged P.”  Dickensians will of course recognize this soubriquet from Great Expectations which as a family we knew from the TV version, one of the classic serials that the BBC showed at Sunday teatimes in the 1960s.  The scene in question occurs when Mr Wemmick is showing Pip round the odd little wooden house that he has built for himself and his father in the manner of a tiny castle complete with battlements, a flagpole, a minuscule moat with a drawbridge, and a small cannon on the roof which is fired every night at nine o’clock to please the otherwise deaf old man, whom Wemmick refers to as the Aged Parent.  This greatly amused my father who promptly adopted the title for himself, even though he was then only in his fifties — considerably younger than I am now, I realize with some shock.

I think I dimly perceived at the time that Dickens was playing games here and that Wemmick’s house was a sort of manifestation of the expression “An Englishman’s home is his castle,”  but I thought no more about it and read no Dickens until I was obliged to when Our Mutual Friend was set as one of our A-level texts: not one of Dickens’s greatest hits (and why were our set books so damn long?  There was also Nostromo, another monster), though Our Mutual Friend has its delights early on.  One that sticks in the memory is the hapless young man at the Veneerings’ dinner party who keeps trying to start a conversation in French but gets no further than “Esker…”.

It did make me realize, however, that Dickens ought to be read rather than seen in film and tv adaptations, which may portray the characters and settings brilliantly enough but inevitably miss the language games that Dickens loved to play when he wasn’t rushing to meet a deadline.  And so, with the additional encouragement of a university tutor, I became a sort of part-time Dickensian, and when I happened upon Craig Raine’s essay ‘Dickens and Language’1 I  gobbled it down and was soon made aware of how much of Dickens’s cleverness — and fun — I had missed in my all-too-casual reading of his novels.

It’s a brilliant piece of analysis.  To quote one of his examples, of Miss Tox in Dombey and Son he writes:

She is a genteel lady in reduced circumstances, someone of “limited independence”. But before Dickens discloses her financial circumstances, we are shown Miss Tox’s inability to make ends meet: “it was observed by the curious, of all her collars, frills, tuckers, wristbands, and other gossamer articles – indeed of anything she wore which had two ends to it intended to unite – that the two ends were never on good terms, and wouldn’t quite meet without a struggle.” The indirectness of Dickens’s method seems itself an example of tactful decorum totally suited to Miss Tox.

Raine finds many other examples of Dickens “literalizing the commonplace”, as he puts it, including Mrs Grandgrind in Hard Times being ‘a bit dim, not very bright’, Wilkins Micawber’s singing in David Copperfield, and

In Bleak House, there is Phil Squod whose experience of life’s vicissitudes has literally made him ‘go to the wall’, as the expression is: “He has a curious way of limping round the gallery with his shoulder against the wall, and tacking off at objects he wants to lay hold of, instead of going straight to them, which has left a smear all round the four walls, conventionally called Phil’s mark.”

Putting the book aside I turned on the tv and found myself hooked into a rerun of Minder, a particularly fine episode featuring the wonderful Richard Griffiths as the hedonistic and totally irresponsible custodian of a rock star’s mansion2, but I had forgotten the subplot in which Arthur Daley is cojoled into investing someone else’s money in three mechanical flying pigs: the sort of coin-in-the-slot machines that used to be positioned in playgrounds and supermarket car parks for kids to ride on.

It’s clear to the viewer that this is one of Arthur’s dodgy deals and very unlikely to pay off, and of course it doesn’t, but in discussing its chances no-one ever says “And pigs might fly.”

For popular tv writing this is pretty subtle stuff, and Minder was always worth watching not just for its characters but also for its language, especially in the episodes written by Leon Griffiths, the creator of the series (no relation to the actor Richard), who gave the world ‘Er indoors (often mentioned but never seen) amongst other delightful things.  Griffiths always denied that he had invented the rhyming-slang expression ‘pork pies’ for lies, but no-one believed him, and he should probably be given credit for actually adding a new expression to everyday speech.  Practically everyone in the UK knows what’s meant if someone is accused of telling porkies.

With these things in mind I’ve been trying to think of any such Dickensian metaphors in my own eclectic reading, but the only one that comes to mind is in Charles Platt’s The Garbage World 3, the world in question being an asteroid called Kopra (geddit?) where other worlds discard their very unpleasant rubbish.  It could be seen as a novel-length literalization of being dumped on from a great height.