Every day in my inbox amongst the spam and those persistent emails urging me to buy another solid oak coffee table is one from an outfit called Delancey Place1 with an excerpt or quotation from a book that these people view as interesting or noteworthy. They are pretty good at choosing from books that are interesting to me too, and as I have always admired the paintings of Edward Hopper this recent post intrigued me. Hopper, they say, “was able to masterfully convey powerful emotions through genuinely American landscapes and scenes that were simple, stark and spare. Among those themes most often recurring in his work were disenchantment, solitude and eros.” and they quote this extract from Gail Levin’s book.2

When he wanted to convey disenchantment, Hopper turned to melancholy of dusk. In Summer Twilight (1920), he presented a man standing before a woman seated in a rocker, a sleeping dog lying by her side. The man appears tense, his head angled downward, his hands in his jacket pockets, although the woman’s fan implies that it is hot. She looks away, refusing to meet his gaze; a distance exists between them. The twilight of the title suggests not only the end of day and onset of night but, by allusion, the end of something, an impending termination, bringing with it uncertainty and gloom. With a pessimism that would later become characteristic of his work, Hopper captured a summer romance in its waning hours; the couple’s idyllic summer setting will inevitably yield to the harsh realities of winter. Hopper’s working sketches of Cape Cod Evening (1939) reveal that the painting evolved through several stages. Initially, he considered having only one figure: a woman seated on a doorstep with a dog standing close by, facing her. Then he tried the woman standing in blowing grass with the dog. His resolution — a man beckoning to the distracted dog from the doorstep with a morose-looking woman standing before the window — changed the entire content of the painting. We now confront a disenchanted couple: she detached, in a world of her own thoughts and dreams, he trying to communicate with the dog instead of with her. The evening here once again alludes to the twilight of a relationship. 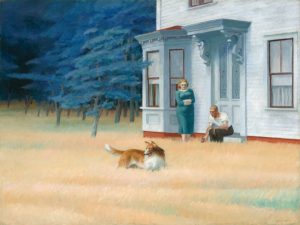 Communication does not work, and as Hopper commented on his inspiration and intention in Cape Cod Evening, even the dog listens only to a distant whippoorwill. The presence of a dog, both here and in the etching Summer Twilight, suggests that Hopper relied on this familiar symbol to make his own ironic comment on the couple’s deteriorating relationship. Certainly, he knew and admired what he called “the honest simplicity of early Dutch and Flemish masters,” embodied by Jan van Eyck’s fifteenth-century Arnolfini Marriage Portrait, in which the dog is a symbol of fidelity and devotion. But Hopper may have also been aware that later, in Dutch paintings of the seventeenth century, a dog often connoted lasciviousness or gluttony, in an ironical reversal of the original symbolism.

In Hopper’s 1947 painting Summer Evening, the time of day again corresponds to a stage in a couple’s relationship. The young couple in the painting — she scantily clad for the summer’s heat — seem engrossed in an unpleasant discussion while they lean against the wall of a porch with only the overly bright electric light — no romantic moonlight for them. The porch of the clapboard house recalls Hopper’s boyhood home in Nyack, suggesting that his conception in Summer Evening was based on distant memories. 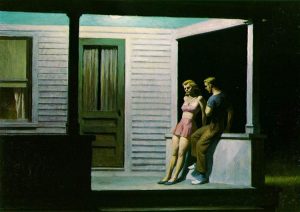 Indeed, he claimed that the painting had been in the back of his head “for twenty years.” The woman’s face is twisted in a grimace, while her shoulders are arched defensively — like the back of a provoked cat. The man, the focus of her discontent, holds his left hand on his chest as if protesting. Hopper poignantly expressed the torment of a passion gone sour: the fresh excitement of spring about to turn into the disillusion of autumn. As in Summer Twilight and Cape Cod Evening, dusk here symbolizes the melancholy of lost desire, opportunity surrendering to inevitable decay.

1  DelanceyPlace.com sends ‘a brief daily email with an excerpt or quote we view as interesting or noteworthy.  Eclectic excerpts delivered to your email every day.’  Subscription is free and all DelanceyPlace.com proceeds are donated to children’s literacy projects.
2  Gail Levin: Edward Hopper: An Intimate Biography (Knopf, 1995)