One of the incidental pleasures of starting a blog is that it’s putting me in touch with old friends that I’ve neglected for much too long. One of them is Charles Platt* who I’m delighted to find is alive and well and posting some fascinating material on Facebook, including this recent piece which I include here with Charles’s permission.

Tonight I watched Wild City on Bluray, the penultimate film from the amazing Hong Kong director Ringo Lam, whose movie City on Fire was ripped off by Quentin Tarantino when he made Reservoir Dogs and established himself as an “innovator” by copying a director who almost no-one had heard of at the time.

My favorite Lam film of all time was Full Contact, which pushed the Hong Kong gangster genre beyond all previous boundaries, featuring Chow Yun Fat up against a totally deranged knife-wielding gay gangster in a gold lamé jacket.

Wild City was made in 2014, seemingly 100% on location in Hong Kong and environs. Like all Ringo Lam movies, it shows people under extreme personal stress, trying to make ethical decisions. In this case an ex-cop is struggling to do the right thing with his no-good half-brother, when they get mixed up with a mainland Chinese woman who has a suitcase crammed with cash belonging to a corrupt lawyer ex-boyfriend. The complexity of the plot is astonishing by comparison with typical Hollywood action movies, yet Lam still has a kind of naïve, almost clumsy charm which creates a sense of realism even when the action escalates to extreme levels.

US critics were condescending and snide about Hong Kong action movies in the 1990s, and twenty years later they were still condescending toward Wild City when it was released, with the added bonus that they complained it was not as good as Lam’s early work (which they had forgotten they trashed at the time).

For me Wild City is a wonderful extension of those 1990s movies (which I loved), using the capability of modern movie equipment to display scenes of such detail, there is a feeling of deep immersion. I almost feel I don’t need to visit Hong Kong, now that I have watched this movie. And, of course, it is very poignant in view of recent political developments. 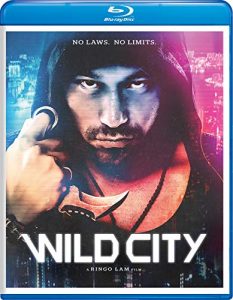 Those wonderfully crazy, extreme action and kung-fu movies were so much a product of exuberance in a city that was enjoying wild growth as a function of minimally controlled capitalism. We’re not going to see anything like that under CCP control.

The cover image at left is inappropriate, failing to show any of the three principal actors. I suspect it was used only on US-region exported versions of the disc, to avoid showing Asian faces to American buyers.

* See my earlier post ’Nigel aka Simon’. Charles has been a prolific writer since the 1960s and is currently writing his autobiography; the second volume, An Accidental Life, Volume 2, 1965-1970: The New Worlds Years, has for various reasons been withheld from distribution in the UK so far but may be made available here soon, and if it is I’ll let you know.